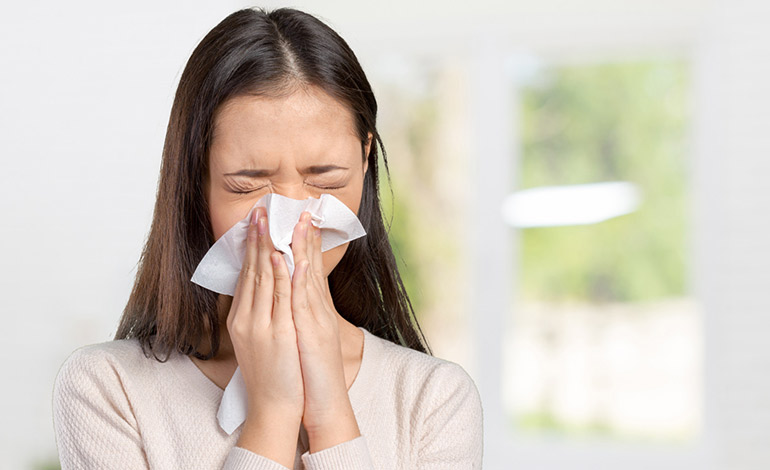 One of the most common reasons for a doctor’s visit worldwide, is a cold or an acute sinusitis episode. Patients would often open with a statement, saying “Doctor, I have sinus” or “Doc, my sinus are playing up again” and then unfortunately also expects an antibiotic for this.

Let us take a step back and evaluate what is the possible reasons for recurrent episodes of sinusitis. Number one would be an underlying allergic rhinitis with chronic inflammation of the mucus membrane lining of the nose and sinus cavities. Allergic inflammation would lead to over production of mucus, swelling of the mucus membranes and either watery discharge or a thick postnasal discharge. Viral infections due to the common rhinovirus, causing an acute viral sinusitis or common cold presenting with similar symptoms and can be recurrent in children with exposure to friends at school and in those with allergic rhinitis that is uncontrolled. The latter, due to more cells binding the virus leading to secondary infection.

Acute Sinusitis is mostly due to viral infections and does not need antibiotic treatment. We should only consider a secondary bacterial infection after 10 days of symptoms or if the condition deteriorates after five days.

During 2020 we have experienced how our lives can be affected by an infectious disease without a cure. It is of utter importance that we protect our current available antibiotics by not using them for viral infections or allergic respiratory conditions needing anti-inflammatory treatment and not antibacterial treatment. Not having an antibiotic for a specific bacterial infection due to resistance, is a real threat.

Allergic Rhinitis, a chronic inflammatory condition of the nose, occurs in 20 – 40% of our population. It is not a potentially fatal condition but leads to poor life quality. Often it is not recognised as the cause of worrisome symptoms including a chronic blocked nose, itchy nose and eyes, poor sleep quality with daytime fatigue. Concentration at school and work will be influenced consequently which may in turn lead to the misuse of energy drinks or even prescription medication for attention deficit syndrome. A chronic blocked nose leads to mouth breathing and often abnormal development of the face and palate needing orthodontic treatment later in life. Having itchy eyes is irritating, specially if you are a woman using make-up or a person using contact lenses, but far more important to recognise is damage to the cornea due to chronic eye rubbing leading to development of keratoconus of the eye. Recurrent episodes of migraine are mentioned in the European paediatric guideless of allergic rhinitis treatment as one of the non-typical symptoms.

All these symptoms and complication can and should be managed protecting the patient from avoidable complications. The first step towards proper management is making the diagnosis of allergic rhinitis. Identifying specific allergens to which a person is allergic is necessary to make the diagnosis, to plan possible avoidance and guide treatment plans. Certain allergens, grass for instance, cannot be avoided and the inflammation needs to be treated ongoing, taking weather patterns and pollen counts into consideration. House dust mites can be managed indoors to keep the levels low leading to less symptoms. The treating doctor will give advice according to test results and test will be done according to a person’s specific exposure which will become clear once detailed patient history was taken.

Controlling inflammation and decrease severity of symptoms is the aim of treatment of allergic rhinitis to improve quality of life. Treatment is planned according to severity and frequency of the symptoms. If symptoms occur more than 4 times a week and more than 4 weeks per year, it is considered chronic allergic rhinitis. If symptoms lead to sleep disturbance or impairment of concentration during the day, impair activity levels and having troublesome symptoms regularly, the allergic rhinitis is classified as moderate/severe and needs active anti-inflammatory treatment.
Discussing treatment would be an article on its own, but some basic principles will be mentioned. It is clear from the discussion above that allergic rhinitis as a condition already can lead to poor life quality making it my mission to warn against the use of medication that can lead to further impairment.

Antihistamines are a first line treatment with patient often self-medicate before consulting a doctor. This is not a problem but, choosing the correct medication can be difficult. A few guidelines until I write the next article on Antihistamines and treatment considerations in Allergic Rhinitis and Conjunctivitis.

The season is changing. Be aware of your nose and ask this question first in your own mind: what is troubling my nose? Seek advice, get tested and get the right medication!

We are ready to help